Home > About the University 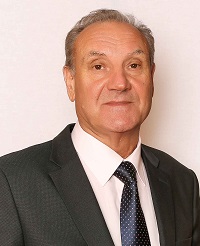 Alexander I. NOVIKOV was born in 1948 in Bryansk Region. After the army service, in 1969 Alexander NOVIKOV was enrolled at the Faculty of Pediatrics, Omsk State Medical University which he graduated with honors in 1975. His career is toughly connected with Omsk State Medical University where Prof. NOVIKOV started working as an Assistant at the Department of Skin and Venereal Diseases and later became its Head.
Theses:
1983 – PhD thesis entitled Clinical Significance of Dislipoproteidemias and Their Role in Pathogensis of Lupus Erythematosus
1988 – conferred an academic rank of Associate Professor
1997 – defended a doctoral thesis entitled Efferent Techniques in Complex Treatment of Chronic Recurrent Dermatosis. This year he was conferred the academic rank of Professor.
Rectorship:
1997 – elected as the Rector
2002, 2007 and 2012 – reelected as the Rector of OSMU
From the very beginning Prof. NOVIKOV consolidated the efforts of the University staff to solve key issues for its development. The result of joint activity was OSMU recognition as a dynamically developing educational institution being in the list of top ten of the best universities in Russia. In April 2012, OSMU became a winner of the competition The Healthy Lifestyle University.
According to Prof. NOVIKOV, one of main tasks is providing the highly qualified medical care for the population of the city of Omsk Region and for rural population of Omsk Region.
Prof. Alexander NOVIKOV pays great attention to the development of research activities in OSMU, aimed both at the training of the teaching staff and carrying out fundamental and applied research. Among the priority scientific directions in recent years are:
1. Actual problems of reproductive health protection and pediatric pathology in Omsk Region.
2. Medical and social problems in addictology in a large industrial center.
3. Development and clinical approbation of new techniques and technical means in surgery.
4. Regional infections pathology peculiarities: monitoring, clinical analysis, epidemiological supervision programs, secondary immunodeficiency.
5. Social and hygienic aspects of population health in Omsk Region.
6. Extreme and terminal states: problems of pathogenesis, clinics, diagnostics and treatment.
7. Dental diseases of the population living in Siberia and the Northern Regions
8. Improvement of medicines supply for the population of Siberian Region.
The international status of the University has increased. OSMU established strong partnerships with European universities in France, Luxembourg, Germany and Italy. International academic mobility programmes are being successfully implemented.
Projected funded by the European Commission:
2006-2009 – Tempus-Tacis Joint European Projects entitled Modernization of Training Courses for Oncology Service in Omsk Region was the only one in the field of medicine.
2009-2012 – Tempus-IV Project Life-Long Learning Framework for Medical University Teaching Staff
The objective of the Project proposed is to develop and introduce life-long learning framework for medical university teaching staff according to European Standards by September 2012 to facilitate of integration of Russian higher medical education to Bologna process.
The main objective is supposed to be achieved through implementation of several activities:
1. Development of qualification requirements for medical university teaching staff.
2. Updating of curriculum for medical university teaching staff training according to the international standards.
3. Presentation and implementation of assessment tools and quality assurance.
4. Establishment of Interactive Resource Center MedEd.
5. Dissemination.
6. Sustainability.
7. Quality control and monitoring.
8. Management of the Project.
To implement this important project, the Department of Pedagogy and Psychology was established in OSMU, working in close contact with partners from the universities of Luxembourg, Strasbourg. Bochum, Rome.
Associations and Committees:
2007-2011 – a member of the Legislative Assembly of Omsk Region, the vice-chairman of the Social Issues Committee and a member of the Committee on Education, Science and Youth Policy.
Research activity:
The author of 300 scientific works, 12 monographs and clinical guides, the author of a number of patents and innovatory proposals. Under his supervision 5 doctoral and 15 PhD theses have been defended.